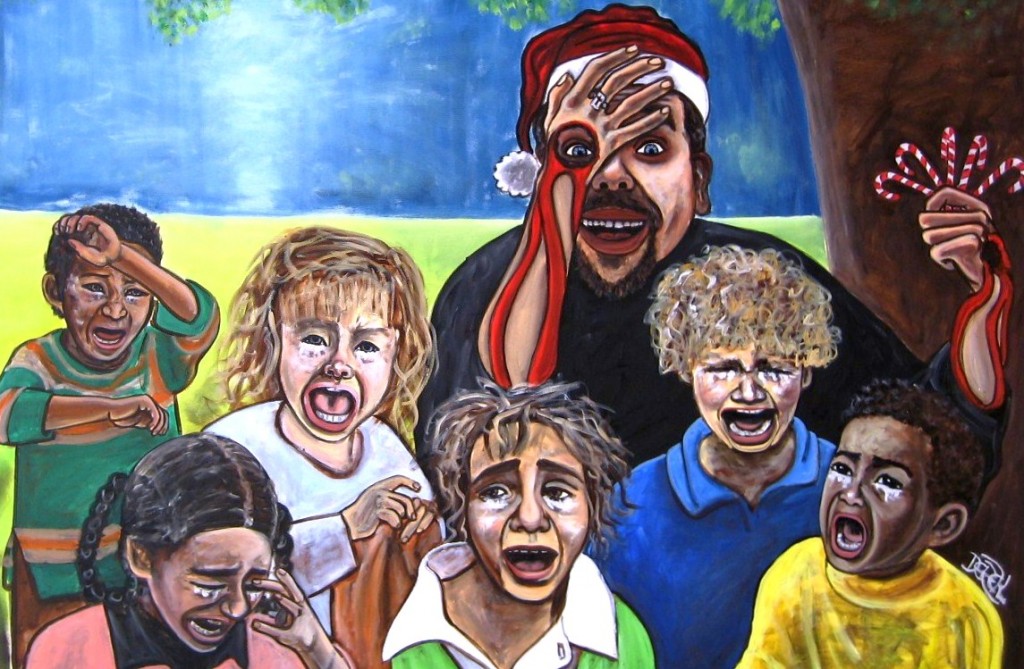 Jesus / Santa Claus provides a conflicting character which both attracts and repels children. With themes of blood sacrifice, guilt and punishment, Christianity is a tough sell for kids. Wearing a Santa Claus hat and giving out candy canes, Jesus tries unsuccessfully to win them over. Based on many ‘Jesus with the children” paintings – which always show a glowing, happy Jesus and never the truth of his passion, this painting draws a more realistic first meeting. 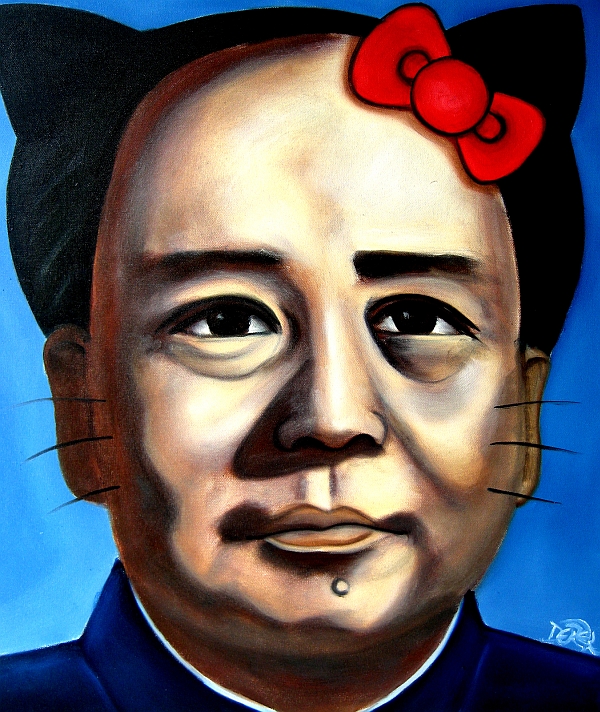 Mao – political reformer and cultural revolutionary, communist leader Mao ZeDong meets Hello Kitty. In the postmodern anarchy of rhizomes and the hyperreal, every character of sufficient status becomes a cultural symbol with no reference; toggle headed toys and stickers are sold side by side – they have been reduced to decorations. Also commentary on how the power of Japanese cartoon Hello Kitty has usurped power from actual political leader. 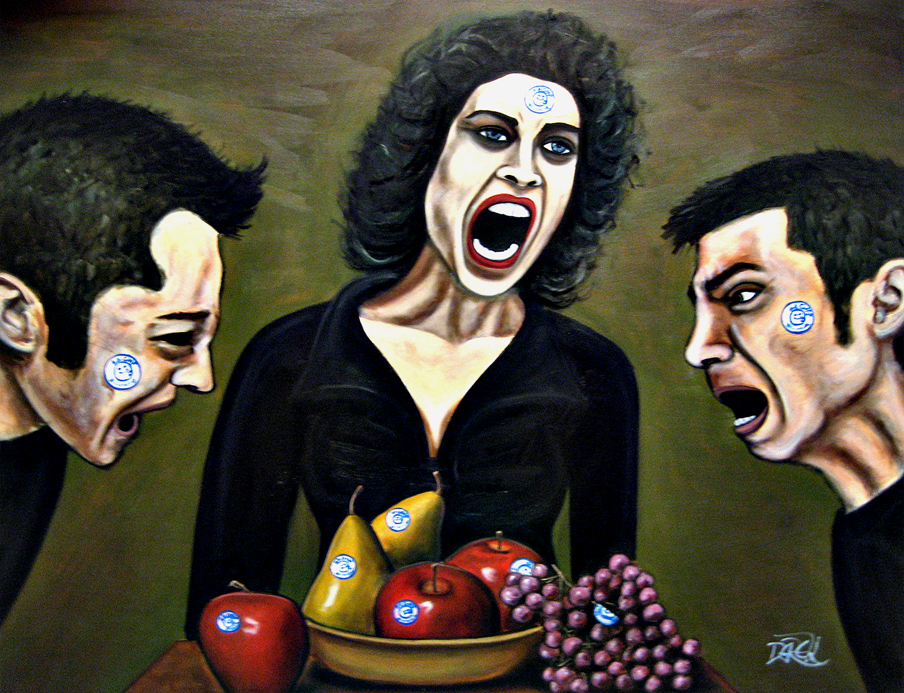 A commentary on genetically modified products; technically ‘still life’ and still pretty to look at, but ‘we are what we eat’ – should GMP products be accepted as passively as they have been? 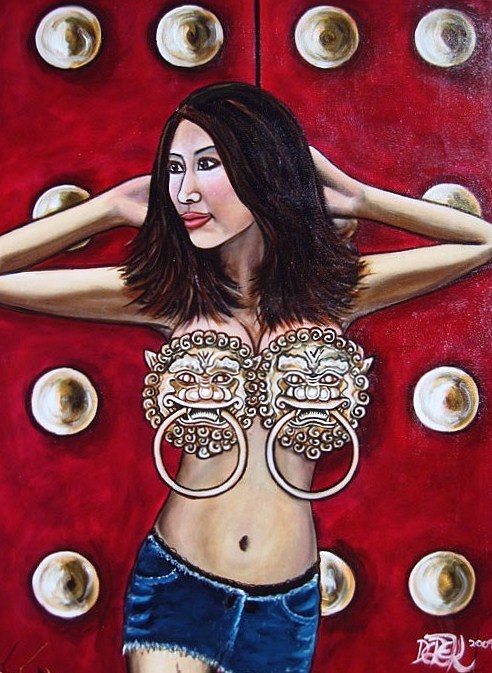 Knockers – Asian girl poses seductively near traditional temple doors; the lion shaped door knockers cover her own well shaped bosom. Unlike Western religions – sex and spirituality is often openly united with no conflict in Eastern culture. (During big events, temples show movies of strip dancers to the gods can enjoy themselves.) 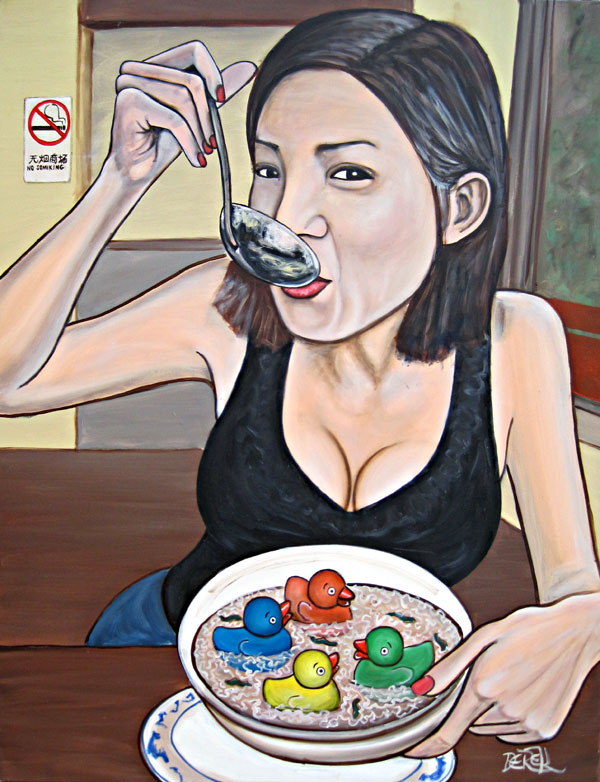 An Asian girl enjoys a bowl of colorful rubber duckies. Where does our food come from? With the advent of manufacturing and mass production, food is a product – often sold through enticing practices, free toys, slogans and mascots. Food has become something to play with – not something to be nourished by. If it isn’t fun and good looking, we won’t eat it. 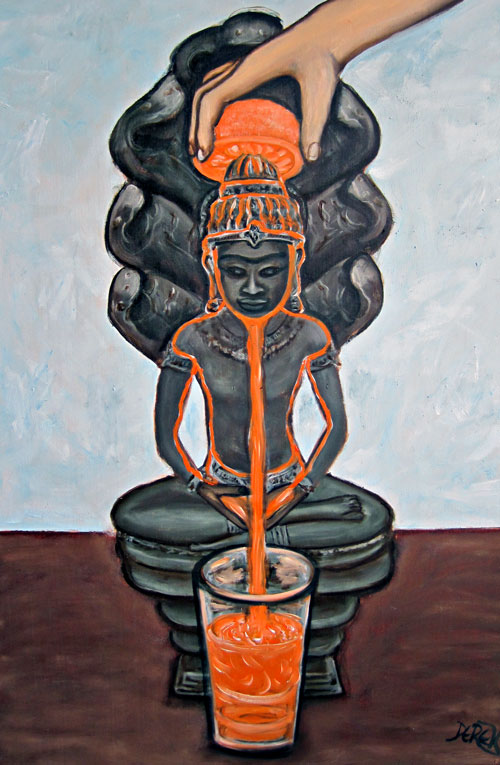 The sublime meets the functional. This was not hard to dream up; the crown on this style of Buddha is naturally the correct shape for pulp extraction and juicer. Further, the stream of juice going up the seated meditative figure could represent the flow of kundalini energy – is the juice pouring downwards into the cup, or returning into its origin? The orange: a perfectly formed embryo guarding the seeds of its gestation (potentiality) under a thick outer shell. 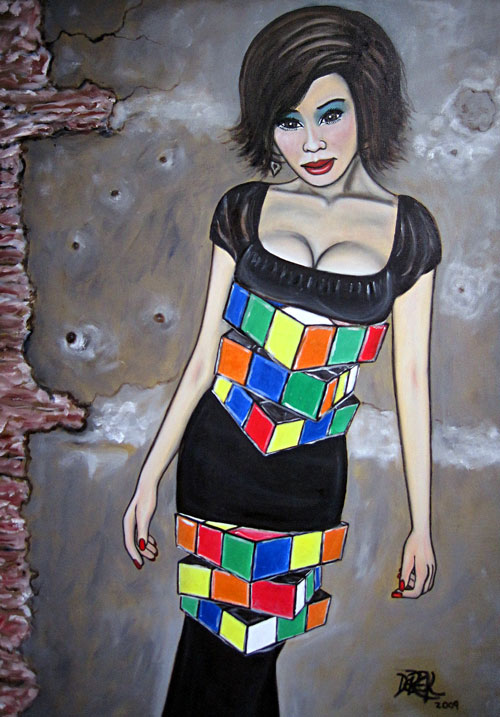 Women are a puzzle to be solved – or perhaps that is the deluded thinking of men who try think with a bit of tinkering, women will become orderly and coherent. May also reflect a tendency to ‘play’ with women’s bodies as objects devoid of personality; ignoring the whole person for isolated pleasure.

This painting symbolizes the mystery of the ‘historical’ Jesus Christ, which has been completely buried beneath church tradition. What is worshiped and taught and preached is not the Jesus that was, but the theology of spiritual values to which Jesus has been assigned a historical role.

In contemporary culture, meanwhile, Jesus has been commoditized. The new Jesus is palatable, tasty, deep-fried, but ultimately full of trans fats and msg. It is packaged and addicting and powerful, but less healthy than a simple bowl of veggies and rice.

Although powerful, bloody and disturbing – please note that Jesus is calmly giving a thumbs up sign; his right index finger doing a disco dance move. Christian tradition in the 4th century AD turned away from celebrating the resurrection of Christ and placed more emphasis on mourning his gruesome death, in an effort to increase feelings of guilt, sin, personal responsibility, and gratitude. It is forgotten, however, that Jesus spent an eternity in heaven both before and after this event. While God punishes sinners to an eternity of torture, Jesus’ torture was but a fleeting moment in his existence. Moreover, the fact that Jesus is considered as ‘fully God’ led many earlier believers to doubt whether he could suffer pain at all (or eat, drink or defecate).

In the Gnostic tradition, there is a story of how Jesus only appeared to have been crucified, or that he was laughing on the cross, or that someone else took his place. Although an important symbolic event, the idea of Jesus suffering, but then rising from the dead unharmed (and knowing before he died that he would be fine and come back) seriously pales in comparison to those bold brave few who suffered real torture, or gave their lives to save others – even when they weren’t planning to resurrect.

Grinning Buddha reposes as Ronald McDonald, holding his daily bread. If Buddha preached fasting and control, why was he so fat? The painting also draws attention to the blend of globalizing tendencies in commercialism and religion. 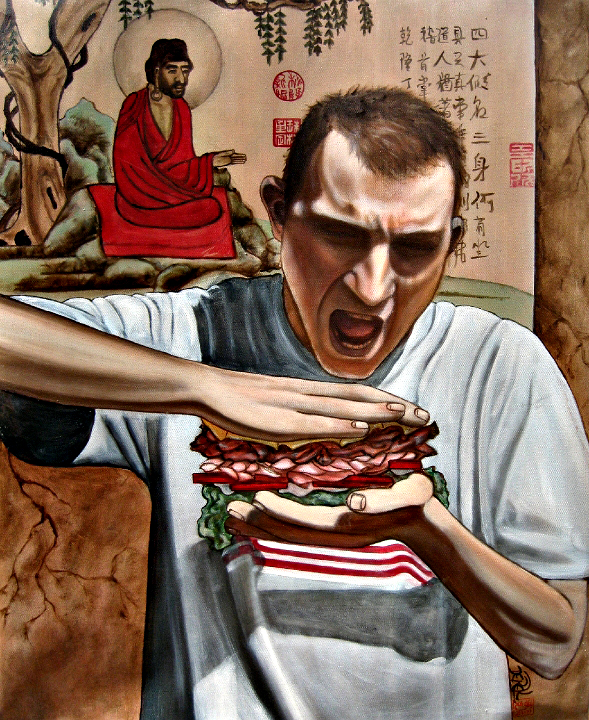 Western male hungrily attacks a sandwich, blind his own preservation. Excess hunger and greed will lead to destruction of self, cautions a wise Eastern ascetic from a poster behind him.