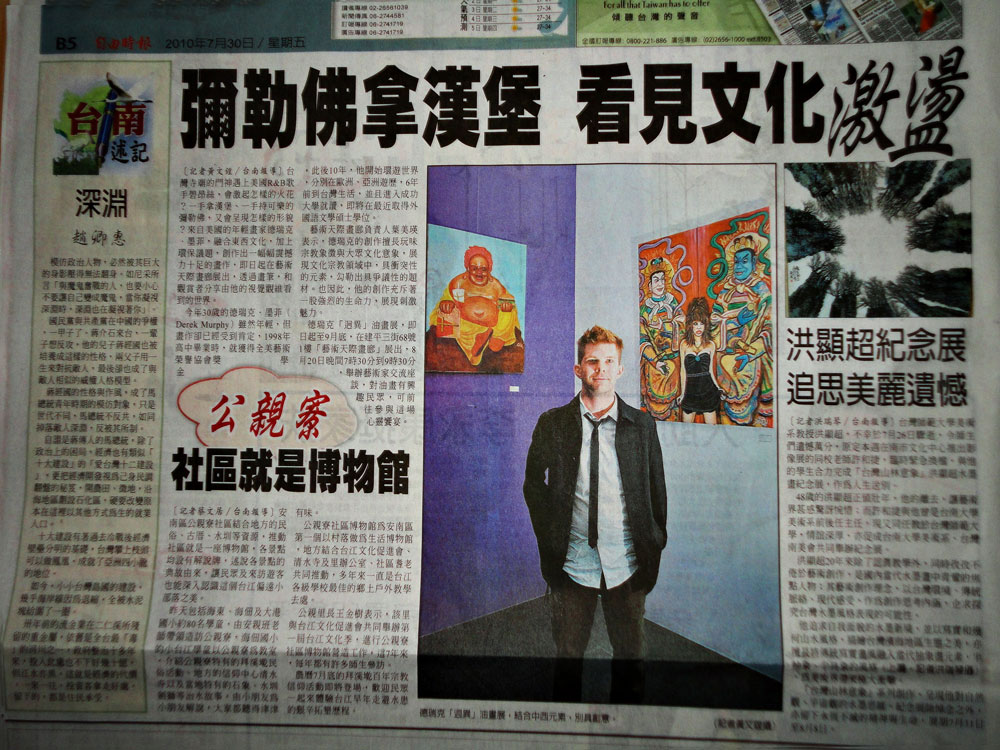 Met with press a couple days ago; they put together this newspaper article. I can’t translate it all… basically it says “Want a hamburger? Get it from Buddha! Taiwanese temple guardians met American Beyonce. Derek Murphy is an American artist who paints East meets West, with cultural images and religious icons. This is really shocking and modern stuff! Murphy’s works are about protecting the environment, globalization and cultural identity…” Then it talks about the gallery and my biography. Damn good article.

I’ve had the article translated. This is what it really says (scroll down for English):

What would happen if Taiwan temple door guards meet an American R&B singer, Beyonce? What does it look like if Buddha holds a hamburger and coke? By integrating Western and Eastern cultures, as well as environmental issues, Derek Murphy, a young artist from America, created a series of shocking paintings, which will be displayed in the Art-Skyline Gallery. Derek shared his perspective of the world with viewers by his paintings.

Although Derek is just 30 years old, his paintings have enjoyed significant appreciation. He graduated from high school with a scholarship from the National Art Honor Society, and has traveled around the world for ten years since then. He has been to Europe and Asia. Derek came to Taiwan six years ago, and later entered Cheng Kung University. He has successfully finished a Master’s degree of Foreign Language and Literature.

Ye Mei-Ying, the owner of Art-Skyline Gallery, said that Derek is good at displaying the religious beliefs and popular cultures in his paintings, which demonstrate the conflicting elements in cultural and religious fields, and form controversial issues. That is why Derek’s paintings are full of a strong sense of vitality and demonstrate fascinating charms.

68 Jianping 3rd st., Tainan, Taiwan (Art-Skyline Gallery). An art exchange symposium will be held from 19:30 to 21:30 on 20th, August. Those who are interested in oil paintings are more than welcome to this soul feast.