Originally from Portland, Oregon, I studied classical realism at the Angel Academy of Art in Florence, Italy after getting a scholarship from the National Art Honor Society. Since then I’ve had exhibitions around the world and been featured in magazines and newspapers.

I paint things that I think are funny. Granted, I have a sick sense of humor – I’ve been called twisted, perverted and worse. And I know that art would be economically more viable if I just painted pretty things like landscapes and beautiful women. But there are so many artists who can do that. So instead, I paint the bizarre and shocking convergence of images that barrage my sense of self-identity in the ever-faster insanity of contemporary postmodern global culture.

My art mixes pop icons, political leaders, religious iconography and mundane object, with the aim to draw attention to viewers’ tightly protected beliefs and assumptions. If there ever was an artist-soul-mate for me, it was Rene Magritte, who wrote:

“My painting is visible images which conceal nothing… they evoke mystery and indeed when one sees one of my pictures, one asks oneself this simple question ‘What does that mean’? It does not mean anything, because mystery means nothing either, it is unknowable”

Why do you have to be so offensive?

I find a lot of people that really enjoy my art, and like me, think it’s hilarious. But of course there are also many people who think I’m the slime of the earth, a hack, a blasphemer, and that I’ll burn in Hell for my iniquity (seriously, they’ve told me so). The truth is that, since studying theology and comparative religion, and then getting my MA and PHD in Literature and Art History, I’m profoundly interested in the delineation and boundaries of belief systems, and how they interact with contemporary, technologically advanced culture.

Also as a historical researcher with interests in religious literature and comparative mythology, I write non-fiction treatises about esoteric symbolism and cultural studies.

So I don’t think my art can be discounted as flippant, or insubstantial, or a media-grab; because it’s actually very conceptual, and it’s influenced by decades of research. I kind of want to use the slogan “Art for Smart People”, but I’m not sure if I could get away with it.

I don’t make pretty art. Although I’m getting better, I focus on capturing the image I want to share, rather than the style. I’m not a naturally messy or expressionistic painter; I paint very carefully and cleanly. In that sense I’m actually a better draftsman than painter.

Since my art isn’t “decorative”, I’ve focused almost entirely on getting gallery representation and selling paintings into collections rather than selling directly at low prices – however with the economy souring and the enormous shift towards self-representing indie artists, I’m rethinking my strategy. I plan to set up prints and merchandise, enter T-Shirt contests, and basically get my art out there.

“As a foreign artist working and living in Taiwan, my paintings offer a unique insight into themes of culture shock, language barriers, international communication, and globalization. More broadly, my previous exhibitions have used the absurd and the surreal to challenge untested assumptions and mental bridges, in the eternal artistic purpose of unveiling Truth and Meaning.”

Derek’s childhood in Oregon gave him a love for beautiful landscapes, a liberal sense of adventure, and a rash, unmediated passion for pursuing the truth in all things. Growing up he spent his time between art and crafts projects and pushing his imagination to the limit. In 1996, Derek spent his Junior year in Argentina as a Rotary Exchange Student and attended a creative arts high school. After returning to the USA, he graduated high school with honors and a scholarship from the National Art Honor Society for creative accomplishments during his Senior year.

Determined to improve his artistic skills, Derek studied classical realism at the Angel Academy of Art in Florence, Italy. He also spent some time in Barcelona, soaking up the art, architecture and culture, and a year in a remote wooded area of Massachusetts, studying philosophy, comparative religion and taking extended day hikes through thick birch forests.

In 2003, he moved to Taiwan. Since then, he’s finished his Masters in Foreign Language and Literature and seen many parts of Asia. Consequently, his work often blends Western and Asian symbols from religion, pop culture or literature. It calls attention to certain complex facets of the boundaries between East and West, as they are forced somewhat incongruously together under the ambitions of globalization and the spread of Western culture. 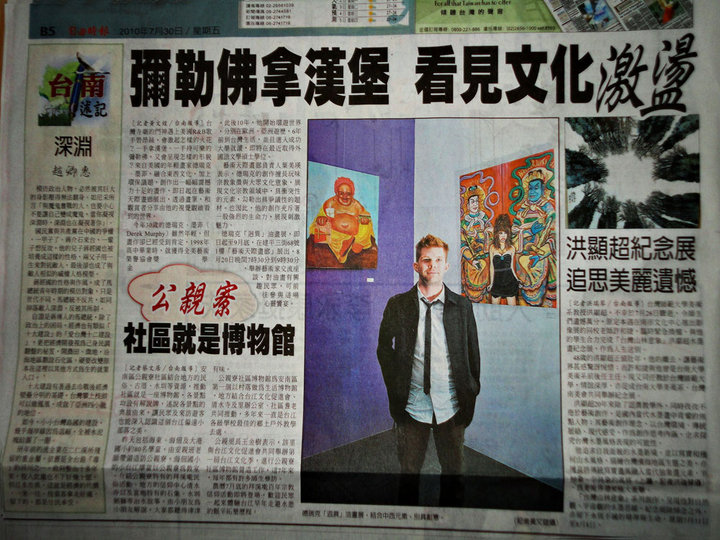